Imagine knowing only a life where, despite living with cerebral palsy, you have built a world for yourself centered around autonomy. You live independently, you choose what you do, eat and when you get to do it. Then, imagine all that being taken from you.

That’s what happened to Colin, when in his late sixties, after overcoming throat cancer, he found himself living in a world that was very different to that which he had spent his entire life building.

As a child, Colin lived a full and varied life, taking all that the suburbs had to offer. Colin would often help in the family business, helping his father who was an undertaker on some adventures.

Being an independent person had always been a huge part of Colin’s identity. In his younger years he would strive to do things on his own, attending a footy game or the pub. “He really did a lot” explains Joyce, Colin’s Independence Australia support worker of over 35 years.

Slipping through the cracks

In his late sixties, Colin was diagnosed with throat cancer. His needs changed and an aged care facility was selected for Colin to move into.

Colin requires the right supports to have quality of life. In the aged care facility these were simply not made available. Colin was isolated, sadly relying on staff members who were not familiar with his unique needs.

The tireless work that Joyce put in advocating on behalf of Colin is without a doubt the thing that saved him. Joyce was able to reach Independence Australia team member, Carl. Immediately Carl began working to find new accommodation for Colin.

A new lease on life

In December 2020, Colin moved into a new home at one of Independence Australia’s specialised disability accommodation houses.

His outlook on life is far brighter than before, saying his new situation is “100 times better”

Carl is proud of the work that he and his team have been able to do in helping Colin, explaining “Colin is in a great position now and has a new lease on life. The Independence Australia facility has super staff and the contrast is day and night.” 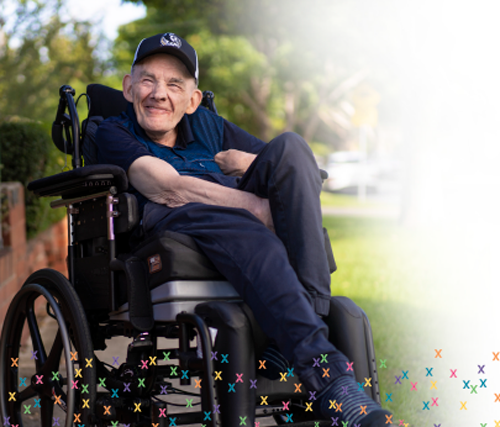 You can help us continue to support Colin and people just like him, with the goal of making their lives “100 times better” when additional support is needed, just by donating today.

It is only with your generosity that we can provide support for people living with a disability, when they find themselves in these troubling situations.