In May, Weave Movement Theatre performed at the ButohOut! Festival at Abbotsford Convent. Co-founded by Janice Florence, Weave is one of the only disability-led dance and physical theatre companies in Australia. This year marks twenty-two years of performances.

It’s a Sunday morning in Melbourne and the air is laced with a crispness that points to the changing seasons. As the sun climbs into the sky, members of Weave Movement Theatre, one of the country’s only disability-led inclusive dance and physical theatre companies, gather in a workroom at Siteworks in Brunswick. Tables and chairs that give some hint of the building’s former life as a school are pushed to the edges of the room, revealing a timber floor dotted with scuff marks from decades of use.

In early May, Weave Movement Theatre performed at the ButohOUT! Festival at the Abbotsford Convent. Their performance was part of an ongoing collaboration with acclaimed Japanese-Australian artist Yumi Umiumare, the only Japanese Butoh dancer in the country. Umiumare is absent today (she’s leading a weekend workshop as part of the festival). So Weave’s co-founder and artistic director, Janice Florence leads rehearsal. Today, the group will run through various elements of their performance. 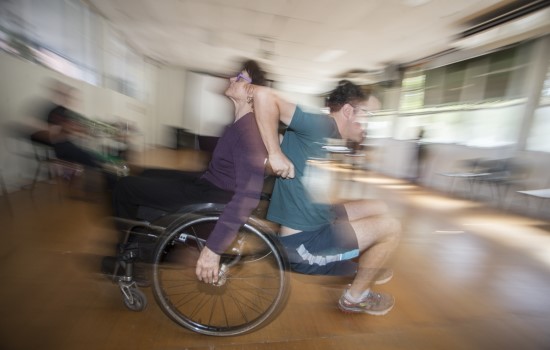 Originally called the Dance of Darkness, Butoh’s genesis is in 1950s post-war Japan. So it’s not surprising that there is a sombre mood to the form. Words like dark and grotesque are often used to describe Butoh. But this year’s festival challenged that by asking if the audience could laugh at Butoh. The festival explored the theme Forbidden Laughter and focused on surreal comedy.

Humour is a reoccurring theme for Weave. The company’s work has been described as possessing a signature style of ‘absurd humour’. It’s a description that Florence embraces. ‘Well that’s my sense of humour,’ she says, laughing, ‘[and] it seems to strike a chord with people in Weave.’

‘I think it’s also tuning into a sort of reaction that you have to the situation of having a disability, in a way. Sometimes I call it cosmic humour, because you’re confronted with this world that has attitudes towards you and sometimes all you can do is laugh.’ But Florence believes that humour is also a way to subvert traditional disability themes. ‘I think I’m sort of rebelling against that in a way, you know: oh, it’s miserable, it’s horrible, oh god. But you know, that’s a burden for us to carry in a way. We don’t want to go around feeling miserable all the time. So, it’s a bit of a reaction against that and a way of coping with the world, too.’

Traditionally, the relationship between art and disability has hinged on art being a form of therapy. And while Florence believes that in many ways art is a form of therapy for everyone, the company works to emphasise that they’re artists and they’re making art. 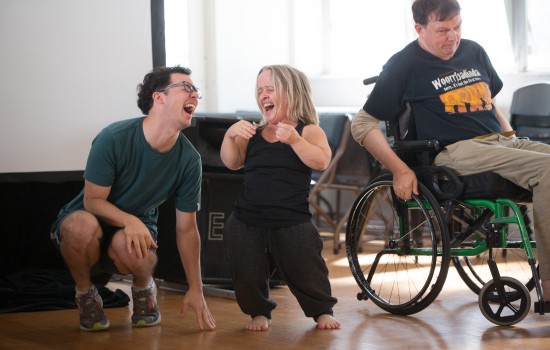 Weave Movement Theatre was founded in 1997 following a series of workshops and masterclasses arranged by Arts Access Victoria with the visiting British inclusive dance company ‘Can Do Co’. Florence was invited to teach the workshops and after they wrapped up the group were keen to continue and wanted to perform. Last year, Weave celebrated its twenty-first birthday with a retrospective photographic exhibition supported by the City of Melbourne. The company has worked with a range of national and international artists, including Sally Smith and Michelle Heaven, collaborations that have offered important opportunities for Weave members.

‘People with disabilities find it really hard to get into training institutions in the performing arts and having artists come in, well-known, respected dance artists, theatre artists coming in, to teach and to direct things has been like a training ground,’ Florence said. But the collaborations also serve to provide training for the artists working with Weave. Florence likes to think that the artists who work with the company are influenced to think about the way they work and encouraged to do more inclusive work.

The arts have long been a part of Florence’s life. She studied ballet as a child and was a voracious reader. After university, she became involved in community theatre but felt something was missing when she was on stage. She enrolled in the graduate diploma of movement and dance at Melbourne University and became interested in a range of dance forms. 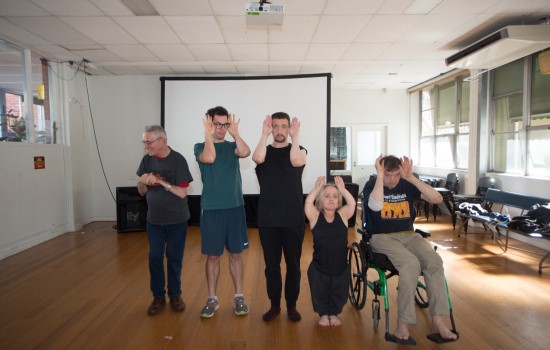 Florence credits this training and the many classes she took both at home in Australia and overseas to assisting her when she acquired a spinal injury after an accident. ‘I found my own mode of expression in dance…I sort of came home to enjoying things my body could do and not feeling I had to be a certain size and shape and just taking on the joy of movement more,’ she said. ‘And I think when I acquired my disability that was with me and I sort of actually took it with me into rehab.’

‘[The] dance forms that I’d been working with, you could be very exploratory and so I was, and people, friends who taught and so forth, took me back into their classes. So, I could really explore ways that I could now work with those dance forms.’

For the uninitiated, the kind of contemporary dance and theatre Weave produces can appear to have no rules. But Florence says the opposite is true. ‘Improvisational forms have their own little guidelines that you work within. And actually, the guidelines are so essential to helping you to make work,’ Florence says, describing Weave’s work as poetic. ‘They’re movement based and sort of visual based, they have text as well, but they don’t necessarily have a narrative, a conventional narrative.’ 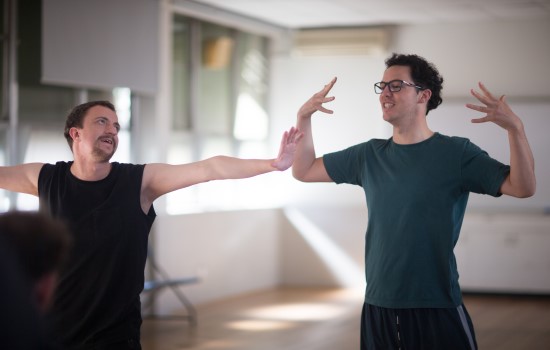 Back in the rehearsal room in Brunswick, sunlight streams through the windows that line the external wall of the building. The members of Weave move through the space, responding to each other, to music and to prompts. The performance is taking shape and the energy in the room vibrates with excitement. As rehearsal wraps up, the group lingers, discussing costuming and the finer details of their part in the upcoming festival.

As the company enters its twenty-second year, what it does off stage is as important as what it does on. Florence believes being disability-led sets Weave apart. And she hopes that the work the company does will change perceptions of people with disabilities.

‘People have such an attitude, that people with disabilities can’t lead, that they always have to be led by someone else,’ she said. ‘[It’s] important to change people’s perceptions.’ 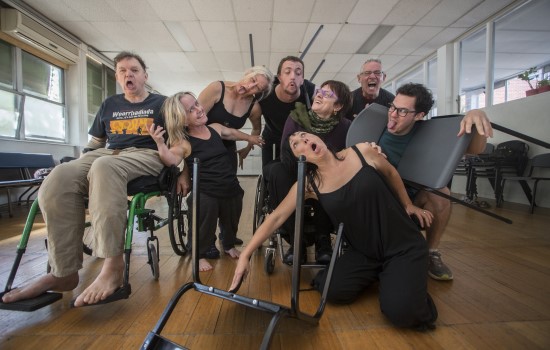 As well as performances, Weave Movement Theatre also run workshops that provide a way for people with and without disabilities to explore improvisation, drama and movement exercises. For more information contact [email protected] or visit the Weave Movement website.

All images by Meredith O’Shea

Frozen is fine! Tips and tricks for cooking up a storm

Getting the ball rolling: Q&A with Rosie Jenes

Parenting with a disability? We’ve Got This Q&A with Eliza Hull

Want to be the first to know? Subscribe here to receive updates on our magazine, podcasts and more.